Indigenous people across the Americas are trying to defend their communities from the pandemic. But for many, isolation can quickly turn into deprivation.

The Wayuu are the largest indigenous group in Colombia. Many fear that the isolation required to protect themselves from the virus will leave them hungry instead.Credit…Adriana Loureiro Fernandez for The New York Times

BOGOTÁ, Colombia — Every morning at a school in the vast desert along the Colombian coast, 40 children, all part of the country’s largest Indigenous group, the Wayuu, gather before class for breakfast.

For many of them, the morning arepa — a traditional corn meal pastry, stuffed with meat — is their only meal of the day.

But since Colombia went into quarantine and schools shut down two weeks ago, Josefa García, a school administrator, has not received any of these meals from the country’s ministry of education. Nor have those children.

And many of the students, some of whom have watched their brothers and sisters die of malnutrition in this remote and often neglected region, are starting to worry about survival. “Our fear is that if we don’t die of the virus,” said Ms. García, 68, “we will die of hunger.”

The global spread of the new coronavirus has put millions of Indigenous people on high alert, aware that just a few cases could spell disaster in places far from hospitals or with little access to soap and water.

But along with concern about future infections are concerns about tonight’s dinner, or tomorrow’s lunch. Many Native communities are unprepared for months of economic paralysis. And in the worst cases, isolation measures are already causing emergencies.

“The little food we had left is gone,” said Adolfo Jusayú, 55, a father of four young boys.

Last week, with his income as a taxi driver halted by Colombia’s countrywide quarantine, all he could give his boys for the day was a drink made of cornmeal called chicha and a single arepa each.

Across the Americas, diseases brought in by outsiders once erased or devastated many Native nations, and this legacy remains strong in collective memories. In recent decades, diseases like measles and swine flu have wreaked havoc on some communities.

Already, more than a dozen Indigenous groups have reported cases of Covid-19, including the Yukpa in northern Colombia, the Six Nations of the Grand River Territory in southeastern Canada and the Navajo in the southwestern United States.

In Brazil, Joenia Wapichana, the country’s only Indigenous member of congress, warned recently that the coronavirus could represent “one more genocide” for Native communities. 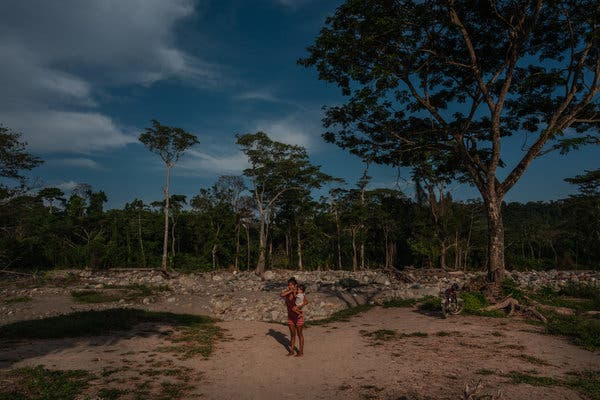 More than a dozen Indigenous groups around the world have reported cases of Covid-19.Credit…Adriana Loureiro Fernandez for The New York Times

In response, many Indigenous leaders have taken protective measures into their own hands, in some cases building hand-washing stations within their territories, sealing off their lands and setting up border patrols.

Sometimes, these measures have been effective. In other instances, leaders are finding their efforts thwarted.

In Colombia, which has about 2,000 of the more than 30,000 confirmed Covid-19 cases in Latin America, Indigenous leaders in the mountainous department of Cauca were threatened by drug trafficking groups after they closed their borders by setting up 69 control points protected by 1,200 guards.

In a March 20 letter publicized on social media, dissident members of the FARC, one of Colombia’s militant groups, said Indigenous patrols found “impeding our mobility” left them “no choice but to act with our arms.”

Years after a peace deal between the FARC and the Colombian government, a swirl of guerrilla groups, paramilitary organizations and crime syndicates remain in the region, and, increasingly, Indigenous people who try to interfere with illegal activity have been found dead. 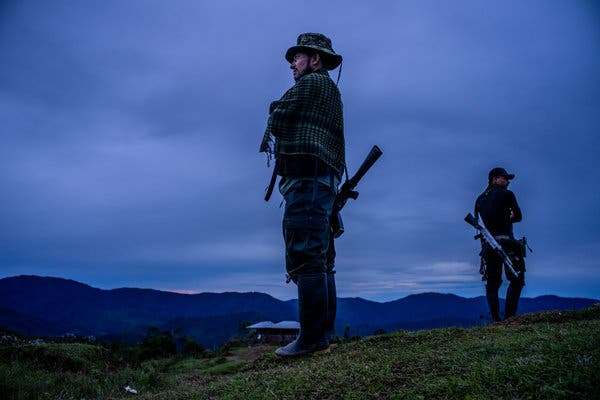 Dissident members of the FARC militant group on patrol in Colombia.Credit…Federico Rios for The New York Times.

Elsewhere, including in Ecuador and Brazil, Native leaders have petitioned large oil or mining companies to halt work in their regions, fearful of contamination from outside workers. They have had limited success.

“We are very concerned,” said Andrew Werk, president of the Fort Belknap Indian Community in north central Montana, after news that the company TC Energy would continue building the Keystone XL pipeline, a 1,200-mile project that drew protests in 2016.

Thousands of workers are expected to arrive in the area this summer. The United States government considers pipeline layers to be “essential critical infrastructure workers,” who can be exempted from health-related stop-work orders.

In a statement, the president of TC Energy, Russ Girling, said the company would take measures to “ensure the safety of our crews and community members during the current Covid-19 situation.”

Few places have felt the effects of the virus as strongly as the northern Colombia coastal state of La Guajira, where the Wayuu make up about half of the 800,000 residents.

After surviving war, revolution and generations in one of the region’s harshest landscapes, the Wayuu now find themselves hammered by quarantine-related hunger.

So far, there is just one case of the virus in La Guajira. But Colombia’s nationwide quarantine has paralyzed the department’s tourism and trade economies, shuttering businesses based around small urban centers and leaving parents unable to buy the week’s rice, fish or cornmeal.

Mr. Jusayú, the driver with four hungry boys, was once among the more successful people in the town of Siapana, saving his money to trade in his mud home for a concrete one.

But recently, Mr. Jusayú has been chasing rabbits, looking for meat. At night, he gathers the children — Aldemar, 2, Juan, 4, Jaiber, 6 and Eduard, 9 — in their home, where they open their Bible and pray.

“More than anything we pray about what’s happening in the world,” he said.

“We need immediate help,” he went on, speaking of the situation in La Guajira. “This an emergency.”

Celina Pushaina, a mother of five who lives in Niño Wayuu, a neighborhood in the city of Uribia, said her bicycle taxi was confiscated by the police in the early days of the quarantine, after she tried to continue working. 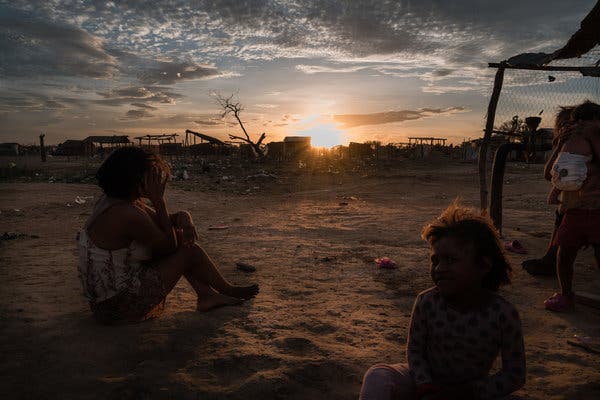 Some Wayuu from Venezuela have fled across the border to Colombia. This has increased the population, and their need.Credit…Adriana Loureiro Fernandez for The New York Times

Working was an act of desperation, she said. Now her children are living on donated rice. “If I don’t earn money,” she said, “I don’t buy and we go hungry.”

María Sijuana, who lives in the city of Puerto López, said her three young children have been surviving mostly on chicha and fried pasta since the quarantine began. “The future is up to God,” she said.

For the Wayuu, the crisis comes in the dry season, and after several years of difficult dry seasons that have exacerbated a longstanding problem of malnutrition.

The crisis also comes as thousands of Wayuu have fled economic collapse in neighboring Venezuela. About 1.5 million people overall have arrived in recent years from Venezuela.

The Colombian government has been working to support vulnerable communities amid the virus’s spread. In March, President Iván Duque said the government would send a one-time payment of about $40 to some of the country’s poorest families.

The ministry of education has also promised to continue its critical school meal program by sending food into millions of homes, a project that will be countrywide by April 20. But logistics are complex in this nation of about 50 million people that is trisected by mountain ranges and connected by long desert roads.

And unable to wait that long, some Wayuu people have begun blocking roads with sticks and branches, trying to publicize their cause.

Some aid groups have scrambled to redesign programs.

The World Food Programme office in La Guajira had to shutter 9 of its 13 community kitchens to protect public health, but is offering food packages instead. Mercy Corps, which gives monthly cash support to about 1,600 families in the department, advanced the mid-April payout by about three weeks.

The group plans to begin distributing hygiene kits soon, which could be critical in an area where thousands do not have regular access to soap or clean water.

Some Wayuu leaders, pointing out that most of their neighbors have long lacked the basics, said these problems might have been prevented had the government fulfilled duties to protect Wayuu laid out in a 2017 decision by the country’s Constitutional Court.

“I am certain the Wayuu will survive,” said Weildler Guerra Curvelo, a Wayuu anthropologist and the former governor of La Guajira.

But “what will be the cost of survival, in human lives, to this community that has resisted so much?” he asked. “How will the authorities help to make sure the cost is as small as possible?”