They Survived Colonization and War. But Venezuela’s Collapse Was Too Much.

PARENSTU, Colombia — They had lived off the land for hundreds of years, before Venezuela or Colombia had even been founded. The Wayuu, an indigenous group of shepherds in South America, had survived war, upheaval, revolution and even being separated from one another by the creation of national borders between the two countries.

Yet for the Wayuu living in Venezuela, the breaking point finally came with the economic devastation under President Nicolás Maduro and the American sanctions against his government.

As the country plunged into the world’s worst economic collapse outside of war in decades, the Wayuu began leaving on foot to Colombia — in the desperate hope that they might find a new home with their brethren.

But here in a lonely Colombian settlement called Parenstu, it hasn’t gone to plan.

The Wayuu from Venezuela showed up with their hungry and malnourished children, their tiny ribs visible after years of economic ruin. The sudden influx has caused such a strain on their impoverished counterparts in Colombia that a searing conflict has erupted between the Wayuu over land, water and the right to belong here. Children on both sides of the struggle now go hungry. Some have died of malnutrition.

The clash in Parenstu is just one on a border now overwhelmed by Wayuu abandoning Venezuela to go to indigenous lands in Colombia. And it reflects a much broader crisis upending Latin America, where the mass exodus of Venezuelans from all segments of society is testing the patience of their neighbors.

At least four million Venezuelans have fled their country in recent years, forced out by hunger, hyperinflation and deadly political crackdowns. By next year, their departure could outpace the migration from Syria to become the world’s largest refugee crisis, according to the Organization of American States.

The arrivals are taxing their new hosts, who are torn between a desire to help and the instinct to protect their own resources. For the most part, the Venezuelans have found open borders, but in Ecuador and Brazil, large mobs have attacked migrant shelters, evicting them from towns that residents say are being overrun. In Colombia, new migrants, unable to receive medical treatment at home, have brought measles and malaria, diseases that were largely controlled in the country.

“The headlines generate xenophobia,” said Felipe Muñoz, the Colombian official responsible for handling the crisis at the border. More than 1.4 million Venezuelans are now in Colombia, he said, burdening a country that had only 140,000 registered foreigners five years ago and has not had a wave of migrants like this in recent memory.

Colombia’s Guajira Desert is home to the Wayuu, a desolate place in the continent’s extreme north where the original inhabitants and new arrivals are both trying to survive. Electricity never came to many of these villages, nor did running water. A five-year drought has meant long-running bouts of hunger. 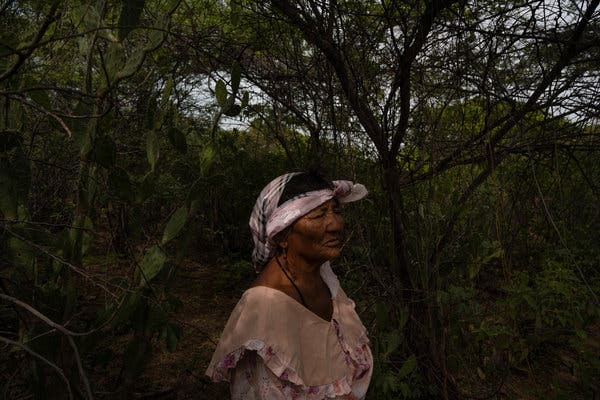 Celia Vangrieken walking in the woods near a dry well that used to serve her community.CreditAdriana Loureiro Fernandez for The New York Times

The leader of Parenstu, Celinda Vangrieken, whose family has lived in Colombia for a century, looked at the refugees from Venezuela -— dozens of newcomers among the hundreds of people living here. She said she had watched with sympathy as they arrived, haggard and desperate.

But while they might be her people, she said, they were not her blood.

On a recent day, an infant with a rash across her forehead screamed. The girl had been vomiting blood, her mother said, and had lost two pounds in recent weeks.

“She doesn’t want to eat,” said the mother, Andreina Paz, a 20-year-old Venezuelan Wayuu who crossed the border this year after watching her neighbor’s daughters die from malnutrition. She feared her own daughter would now die in Colombia.

Celia Epinayu buried her own son, Eduardo, in February. She is not a migrant, but a Colombian Wayuu living on the lands where her parents had raised her. But as Ms. Paz and others from Venezuela kept arriving, the food for Ms. Epinayu’s clan grew scarce and she could not feed her five children, including 10-month-old Eduardo.

“Your boy is dead, you have to let go,” said Betty Ipuana, the local schoolteacher, who was visiting Ms. Epinayu at her adobe house. “The ones you must look over now are the ones that are alive.”

The strain is evident on the faces of the putchipu’u, the Wayuu authorities who mediate disputes and deliver messages between clans. They sat under a thatched roof beside the highway, discussing dozens of new conflicts over land, and the fear they might widen into blood feuds between families. On the northern coast, Colombian Wayuu recently torched the tents of newly arrived Venezuelans.

“It’s the fear we all have, that this land can’t support us all,” began Guillermo Ojeda, speaking to the other mediators at the table. But he said the Venezuelans had to be accepted, even if it meant risks for everyone.

José Manuel Pana, another putchipu’u, lay down his cane, straightened his hat and said he was not convinced.

“They come to Colombia and it’s all a struggle for land to them: They build their home, and they build a problem for another family,” said Mr. Pana. “What have they brought here from Venezuela? They’ve brought an infection.”

Amaritza Ibarra, a migrant from Venezuela, resting under the tree that became her home in the Colombian Guajira.CreditAdriana Loureiro Fernandez for The New York Times.

Ms. Vangrieken, the 72-year-old leader in Parenstu, recalls the day when a group of Venezuelan Wayuu first came to her land with a small box containing the bones of their relatives.

Under Wayuu tradition, two decades after a person dies, the family members return to the cemetery for what’s called the “second wake.” They break open the tomb, clean the bones and rebury them at a site they believe their ancestors came from.

But the custom dictates something else as well: Relatives of the deceased may also claim the land where the remains are reburied and build homes nearby.

Ms. Vangrieken said the possibility of a mass migration hadn’t even crossed her mind at the time. It was 2009 and Venezuela was still prosperous. Only a few people were asking to build homes near the remains, and it seemed absurd to her that anyone would claim Parenstu as their own.

But last year, newcomers began to show up, as hyperinflation cut off countless Venezuelans from food and Mr. Maduro sealed his grip over the nation in a widely condemned re-election vote.

In January, the political crisis intensified as the United States and dozens of other countries recognized the leader of Venezuela’s opposition as the legitimate president. American sanctions on Venezuela’s most vital industry — oil — followed, taking a serious toll on the nation, including in Wayuu areas, which sit outside one of the country’s oil main hubs.

The Wayuu in Parenstu sometimes found it hard to recognize the new arrivals as kin. Some had come from cities and didn’t speak Wayuunaiki, the native language. They constructed improvised houses out of poles and plastic, rather than out of adobe like the homes in Parenstu.

But there was one tradition Wayuu tradition the Venezuelans seemed to know well: The cemetery gave them the right to stay.

“My mother always said we should give them space, that they might eventually leave,” said Yomeilia Vangrieken, one of Ms. Vangrieken’s daughters. “She made a big mistake.”

Not long after the newcomers began settling on Ms. Vangrieken’s land, her family woke up to an angry crowd of several hundred people. They were from another Colombian Wayuu clan, and said they had come to avenge the beating of a young man who had been struck by a Venezuelan Wayuu on their land.

One of the putchipu’u, or Wayuu traditional authorities, taking a break during a meeting of the council.CreditAdriana Loureiro Fernandez for The New York Times.

They had followed his footprints in the sand back to Parenstu, Ms. Vangrieken recalled, and now demanded a payment of around $1,500, holding her responsible as the traditional leader.

“I didn’t have that amount, and neither did the Venezuelans,” said Ms. Vangrieken, who offered the clan 10 of her own sheep instead, nearly all the livestock she owned.

Even as tensions grew, Ms. Vangrieken continued to ask for patience from her clan, arguing that, as Wayuu, the new arrivals had to be treated as equals.

Malnourished Venezuelan children were enrolled in school and offered meals, though it meant less for Colombians. In one case, a Venezuelan Wayuu woman arrived sick and was given an identification card of a Colombian Wayuu woman so she could be treated at a public hospital. But the sick woman died in the hospital; Ms. Vangrieken fears that the Colombian Wayuu who offered the ID card is now registered as dead.

Milcidi Palmar, a 32-year-old Venezuelan Wayuu refugee who fled to Parenstu, said shortages of medicine had led to the deaths of four members of her extended family.

Milcidi Palmar sitting on a hammock in the room that she shares with her two children.CreditAdriana Loureiro Fernandez for The New York Times.

Then last year, her youngest child, Mayerli, fell ill. Ms. Palmar wasted the little money she had on bus rides to a Venezuelan hospital, which sent her away with nothing to control the fever. Mayerli died.

Shortly after, Ms. Palmar’s other daughter, Wendy, got sick, too. Ms. Palmar said she returned to the hospital, insisting on treatment. She said Wendi got an injection, but her skin turned purple in the days that followed. Wendy stopped breathing.

“There was nothing I could do but watch them both die,” she said of her daughters.

The story weighs heavily on Yadira Martínez, the daughter of Parenstu’s leader, who often takes over some of the responsibilities running the village.

She was with Ms. Palmar at the three-acre plot in Parenstu that Ms. Palmar and her husband had encircled with a wooden fence after they occupied it last year. Ms. Palmar had been making charcoal to sell — using trees considered sacred to the Wayuu in Parenstu.

Yadira Martínez recalled how she had played as a child among the trees Ms. Palmar was now cutting down. Yet she was split between nostalgia for that time and sympathy for a fellow mother with mouths to feed. 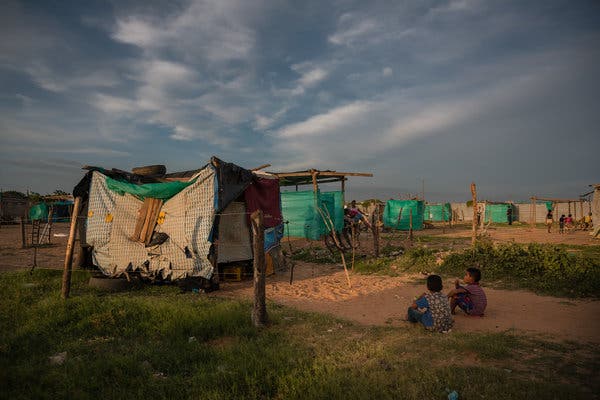 Children of Venezuelan migrants eating outside an improvised camp in Colombia.CreditAdriana Loureiro Fernandez for The New York Times.

“Want to buy some charcoal?” Ms. Palmar asked, cracking a joke to break the tension. The two women shared an uneasy laugh.

Between the drought and the new arrivals, there is little water in Parenstu. A reservoir has run nearly dry, only a silted gray pool in a vast desert.

Toward sundown, Celinda Vangrieken and Yadira Martínez walked to the edge of town, to check a well hidden away under scrub brush. It was dry, but it reminded Celinda of a girl who had fallen inside and drowned decades before.

“How could anyone say this land is not ours?” Yadira said after her mother finished the story. “This is where we shed our blood.”

Their clan had settled in Parenstu, according to family legend, after a dispute that began over a pot of necklaces and quickly escalated into a blood feud over territory — the kind everyone here seemed eager to avoid.

A short ride from the well stood the cemetery of the Venezuelan Wayuu, bordered by fence of cactuses. Celinda Vangrieken thought for a moment. The fate of her village seemed tied to Venezuela in a way she felt she could not control.